I use the polar gps attachment with my rs800cx, it gives me accurate distance, speed and to record my route which i download to google earth after my training session. The old g3 which was bulky and heavy did not give a constant record of data as it kept loosing the signal and took ages to pick up the satellites which is the last thing you want when you are out trainingalso the retraining clip was constantly breaking due to the poor quality material used. So now with my new g5 i find it ultra light, slim and barely even notice it on my arm in its neoprene elasticated arm band. It picks up satellites in under a minute and maintains the signal, even while deep in a forest, i went inside once without switching it off and it constantly searches until it can pick up the signal again, no need to manually reset the unit or watch as with the old model. And no more batteries to buy, the g5 has a mini usb point to charge the unit, with the flashing led light changing colour to indicate the power level. As a snowboarder, mountain biker and trail runner this is a piece of tech that i could not be without.

I have a rs800cx watch and previously used a g3 gps which was very unreliable. After a couple of years of not really using gps that much i started using one of the online websites for tracking your exercises, hence the desire to get gps data again. I wasn’t sure whether to stick with polar after my experience with the g3 but decided i had enough invested in continuing to use the (bike sensors, great watch etc. Rather than switch to garmin). I’ve not been disappointed, the g5 finds satellites quickly (partcularly if used in the same location), the battery lasts at least the 20 hours advertised, and the sensor is small enough to slip into my running shorts key pouch or cycling jersey pocket and works a treat in there. All in all very pleased and the data is very accurate too. Add into all that, you can charge it with a standard micro usb which we have in abundance in this house so unlikely to find myself somewhere with a flat battery and unable to charge it.

Better accuracy than the g3, but can be quite long to pick up signal, battery life is disappointing, must be charged every day.

Use it for running, cycling for refereeing football matches, on golf course. Even sitting in a chair to check my heart beat at rest.

Love this set up with the rcx5 ‘watch’, the output to the computer is spot on and data is easy to work with.

I wish i’d bought this before instead of the wheel mounted speed sensor that i initially bought. I was concerned that the gps signal wouldn’t get through when cycling through densely wooded areas but, in fact, they get through with no problem (so far). I like that the data integrates with polar personal trainer. The map showing the route is useful to see where things were going ‘wrong’. I use it with an armband which i find slightly annoying as it tends to feel a little tight after a short time. Might change to using the clip in future. Generally a nice bit of kit. I’m nothing to do with sky cycling i’m simply a leisure cyclist so perhaps i’m easily pleased(?).

Gets signal quickly, works in my pocket or bag, battery lasts well, just a bit pricey. Got the rcx3 as present so had to buy the g5. Probably only advantage over all in one units is battery life. 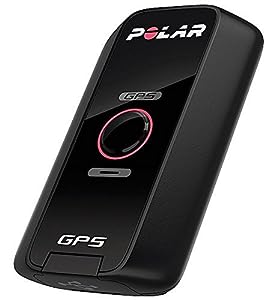 Great addition to my polar watch. Is great at tracking exactly where i travelled and have not had it lose connection. My only problems i have had at times is getting it to pair up with my watch right before i ride and it takes a few attempts to sync.